Sr Bernadette, principal of St. Agnes' Primary, had an idea that would, at the time, transformed the school (now Scoil Úna Naofa*). She asked Dr Joanna Crooks to assist her in taking a leap of  faith and establishing an ambitious Music Project that helped bond the community as well as the school.   In 2006 the violin project, which saw children being given the chance to learn the instrument free of charge with help from volunteers and a generous donation form the Sisters of Charity and a AIB Better Ireland Award started a chain reaction that began a school orchestra, parents’ orchestra and a community Musical Society.

Before that time, no child in the school learned to play an instrument, or knew any adults who played instruments. Now pupils, and past pupils of the school are given the opportunity to benefit from free instrumental tuition, music theory, and participation in performing ensembles. In less than fifteen years, the initial project has developed into three performing ensembles: Scoil Úna Naofa Orchestra (Primary School), St Agnes’ Chamber Orchestra (Secondary Students, playing string orchestra original scores) and St Agnes’ Parents’ String Orchestra. An intergenerational summer camp brings everyone together for a week of music-making which is a highlight of the year.

The Musical Society was started in 2011 and shortly after that in 2012 the St Agnes’ Community Centre for Music and the Arts (CCMA) was formed which allowed the expansion of services to a wider community. The Centre houses the St. Agnes' Crumlin Community Choir, the Memory Lane Choir, for those diagnosed with dementia and Alzheimer’s Disease and the St. Agnes' Cultural and Heritage Society.  The Centre also provides quality affordable music classes in a variety of instruments to the wider community.

The School Project alone has enabled over 1,000 children to have the opportunity to learn musicianship, to play an instrument, and to play in an ensemble and the programme has extended to the parents of the students and to the entire community, maintaining participation of ex-pupils through to their adulthood and including adults who have never learned music in the late-starter orchestra and in staged musical productions. The wider community has access to many free concerts and activities during the year and to live theatre productions of great classics of musical theatre and pantomime.

Due to the expansion and success of the various project strands, it was decided to restructure the St. Agnes' CCMA to assist in the consolidation and sustainability of the organisation. 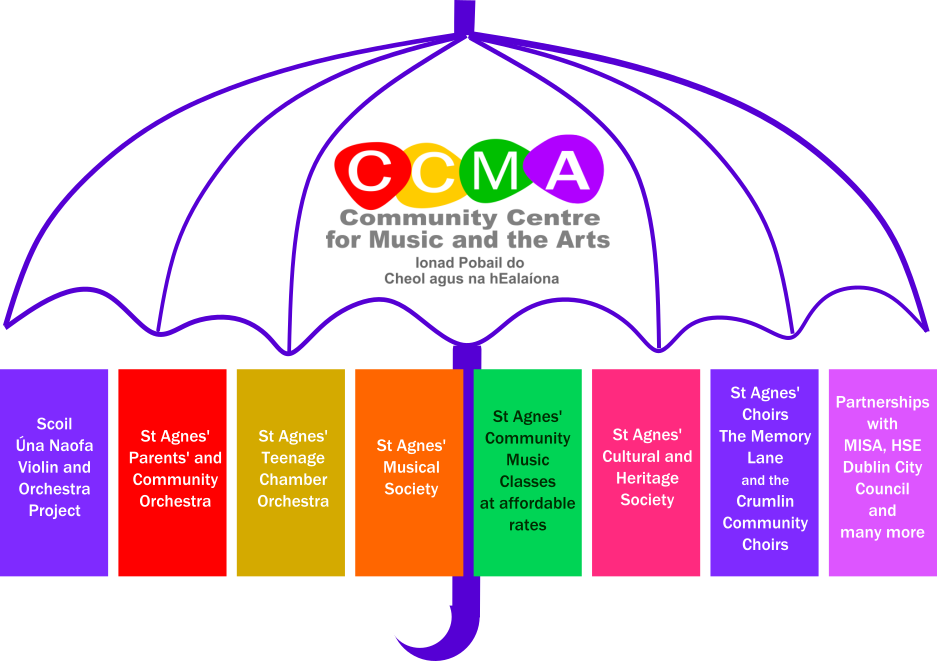