All our brightest talent of all ages, with participation ranging from instrumental, vocal, craftwork of all kinds and all that goes with putting on a performance of this kind were involved in this production.

We were delighted with the beautiful, colourful and imaginative work produced by the children of St. Agnes’ and Scoil Colm schools. There are animals two by two, rainbows, storms, construction, etc, etc.  Well done to teachers and pupils on such great work. They really capture the story of the Ark very well.

Recipe for a Flood

Planning the Flood for St Agnes’ has been a long process, maybe two to three years in total from the earliest thoughts to the performances on November 12th which are to celebrate a 10th birthday – ten years since the initiation of the School Violin & Orchestra Project in September 2012.

The overriding concern was to find a way to involve as many people as possible, showing through performance how the Project has grown in itself and has also given birth to so many other musical ideas and musical activities within the wider Community.

To attempt an opera in original score seems audacious, but it was composed for children by Benjamin Britten  and all the ingredients to make a great ‘FLOOD’ seemed to be present right there in St Agnes.

Costumes and masks – a creative team who meet on Mondays to make costumes for the Musical Society productions and annual pantomime, and crafts for the annual Christmas Market. Two outstanding artists, Olivia Uhlar and Finola O’Keeffe, who regularly volunteer their assistance, design and paint the masks which are mounted on foam board.

And finally but most importantly the ANIMALS and BIRDS – the primary school children  - without whom the story of Noah’s Flood could not be told!

While we will have a cast of many on stage, in addition to musicians, backstage etc, the following is the initial list of principals for the opera.

Benjamin Britten
Benjamin Britten was born in 1913, and lived until 1976. His mother was a very keen amateur singer, and young Benjamin loved music, and began composing at the age of 5, going on to study later at the Royal College of Music, London.

He wrote many works for voice, including songs, choral works, and large scale works for orchestra and voices like the ‘War Requiem’. His best known opera ‘Peter Grimes’ is about a fisherman in a small English fishing town. This work placed him as the greatest Opera composer from the UK for centuries.

Among his best known orchestral works is the ‘Young Persons’ Guide to the Orchestra’ – a piece shows off in dazzling fashion each instrument of the orchestra (with or without narration), while being a thrill for any listener at the same time.

Britten wrote ‘Noye’s Fludde’ in 1958 as a work that would include people from throughout the community, and as well as small number of professional level singers and instrumentalists, he gives key roles to younger artists also. The animals are all played by children, and Britten envisaged young artists also performing many of the instrumental and vocal roles.

Hymns used in the opera
These hymns are used to add to the drama, and to involve the whole audience in trying to save the us all from the flood. We invite you to sing your heart out, save the day, save the world!

LORD JESUS, THINK ON ME
The words were written in Greek in the 5th Century by Synesius of Cyrene, Bishop of Ptolemais, and appears in Damon’s Psalter of 1579 to a tune known as Southwell.  This translation is from late 19th century.

ETERNAL FATHER STRONG TO SAVE

Eternal Father, strong to save, Whose arm doth bind the restless wave,

Who bidst the mighty ocean deep, Its own appointed limits keep,

O hear us when we cry to thee, For those in peril on the sea.

Who walkedst on the foaming deep, And calm amidst its rage didst sleep,

O hear us when we cry to thee, For those in peril on the sea.

O Sacred Spirit, who didst brood, Upon the chaos dark and rude,

Who badst its angry tumult cease, And gavest light and life and peace,

O hear us when we cry to thee, For those in period on the sea.

THE SPACIOUS FIRMAMENT ON HIGH

The spacious firmament on high, With all the blue ethereal skyAnd spangled heavens, a shining frame, Their great original proclaim.

And publishes to every land The works of an almighty hand.

Soon as the evening shades prevail, The moon takes up the wondrous tale,

And nightly to the listening earth, Repeats the story of her birth.

Whilst all the stars that round her burn, And all the planets in their turn

Confirm the tidings as they roll, and spread the truth from pole to pole.

What though in solemn silence all Move round the dark terrestrial ball,

What though nor real voice nor sound Amid their radiant orbs be found,

In reason’s ear they all rejoice, And utter forth a glorious voice,

Forever singing as they shine, The hand that made us is divine. Amen.

An impressive rainbow has emerged. Weeks of planning, cutting, sewing etc have now paid off, and this rainbow will add some very welcome colour and cheer after the expected flood.

The ark is now really taking shape, with some final shaping and paintwork. Glad to have got this far, as although the weather is great, the forecast is for rain!

As so much fabulous artwork has come in from the school children, we have built a web School Art Gallery>> where it can all be seen as soon as we have it available. There are Rainbows, Doves, Animals, Ravens, Arks, Sunshine, Rain and everything else you might expect to illustrate the story.

More work on the Rainbow. Colours are being added all the time. As the colours extend out along the rainbow, more and more fabric and sewing is needed. It is starting to look really spectacular. If we are on yellow, there must only be a couple more to go!

An ark in the making.lots of work needed to paint and embellish but it can be ready quite quickly if the weather looks threatening!

Eight girls in St Agnes 6th class who will be leaving primary school in June are going to try out as the waves and had a first practice during morning break in the corridor beside the library with their blue and green chiffon waves. It is a lot harder than it looks to keep the waves moving slowly and build up to a climax during the storm.

Children in 2nd class experimented with holding the masks. Students in 5th and 6th class joined the rehearsal at 1 pm directed by Gerry Noonan. First attempt to find out how many animals and birds Noah will be able to get into the Ark..

The weather is beautiful, and it seems fitting that the magnificent colours are appearing on our rainbow.

The musical colours for the rainbow are being prepared also, with the beginning of the hand bell rehearsals. Bells have been assigned and we are producing the beginnings of that magical sound.

Meanwhile axe, hatchet and hammer have arrived. They will be needed for building the ark. Parental advice: don’t worry, they are made entirely of wood.

As sharp as any in all this town…’

Weeks fly by. Girls in 3rd and 4th class have come to finish backing masks on foam board.

Incredibly the wind machine has arrived, made at home by Seamus Doyle.

It is used in the orchestra during the storm. More on Wind Machine>>

The hand bell group are now meeting regularly on Mondays at 6 pm before the Parents’ Orchestra rehearsal.

The Slung Mugs to make rain drops have made an appearance in the music office too.

‘…..And beasts and fowls with thee thou take

He and she, mate to mate,

For it is to my liking

Mankind for to annoy. ‘

Zoe Ray who has taken part in the two most recent productions of St Agnes’ Musical Society will be ‘The Raven’ . Zoe was one of Annie’s younger sisters in ‘Annie Get your Gun’ in March 2016 and also played a variety of roles in the pantomime in January. The Raven is sent out by Noah to find out if there is any dry land anywhere and does not return and dances to a remarkable cello solo. Sophie Nolan, who plays violin in St Agnes/Scoil Colm Primary School Orchestra, will play the part of  ‘The Dove’, who is sent out after the Raven and faithfully returns with the olive branch which Noah declares to be a sign of peace. The Dove is accompanied by an equally beautiful and evocative solo on recorder.

After lunch St Agnes’ 4th Class joined 3rd Class to learn the Kyrie Eleison as the animals and birds arrive and made a start on learning the Alleluia at the end, as well as Eternal Father, Strong to Save.

5th class try out some of the masks.

Casting was completed for Noye and his family on Tuesday 26th  as Rebecca Connell joined the cast following an audition. Rebecca will also sing the part of Chava in the spring production of  ‘Fiddler on the Roof’.

Children from 3rd class came to help make masks. The numbers of animals and birds is now increasing rapidly. The Costume Club have begun to assemble the rainbow.

‘My bow between you and me, in thefirmament shall be…’(the rainbow)

The Rainbow is being constructed. Bamboo poles are used to mount the soon to be very colourful rainbow. The rainbow appearance is a great moment in the opera as it shows us the sun has come out, the flood will pass, and Britten creates a magical handbell sequence to mark the moment. Although much work has already been put into planning, organising, designing etc, April sees a real injection of energy into the art and craft work, as well as bringing together some of the musical elements.

Ms Doherty's 3rd Class met Gerry Noonan (NOYE) for the first time in Room 31. Gerry told them the story of Noah, and the class learned the Kyrie Eleison and sang Eternal Father strong to save for the first time.

John and Margaret Whelan, Ann Cummins, Frank Slocket, Jim Slater and Phyllis Monaghan meet the handbells for the first time after the Parents Orchestra rehearsal in St Agnes; CCMA. The handbell group will start meeting weekly for short rehearsals at the end of the morning string orchestra rehearsal.

The NOYE story is really beginning. The Monday Costume Club started cutting robes for NOYE. All the materials have been bought to make the costumes for Mrs Noye, the three sons, Sem, Ham and Jaffett, and their three wives. Costumes for the Gossips are already made, and have appeared most recently on Bali H'Ai in South Pacific.

The first experiments on mounting the painted animal and bird heads on foam board worked very well. Plans were made to bring children into the work room in small groups to help with the masks as much as possible.

The dimensions of the rainbow were worked out. It should fold out like a giant fan. 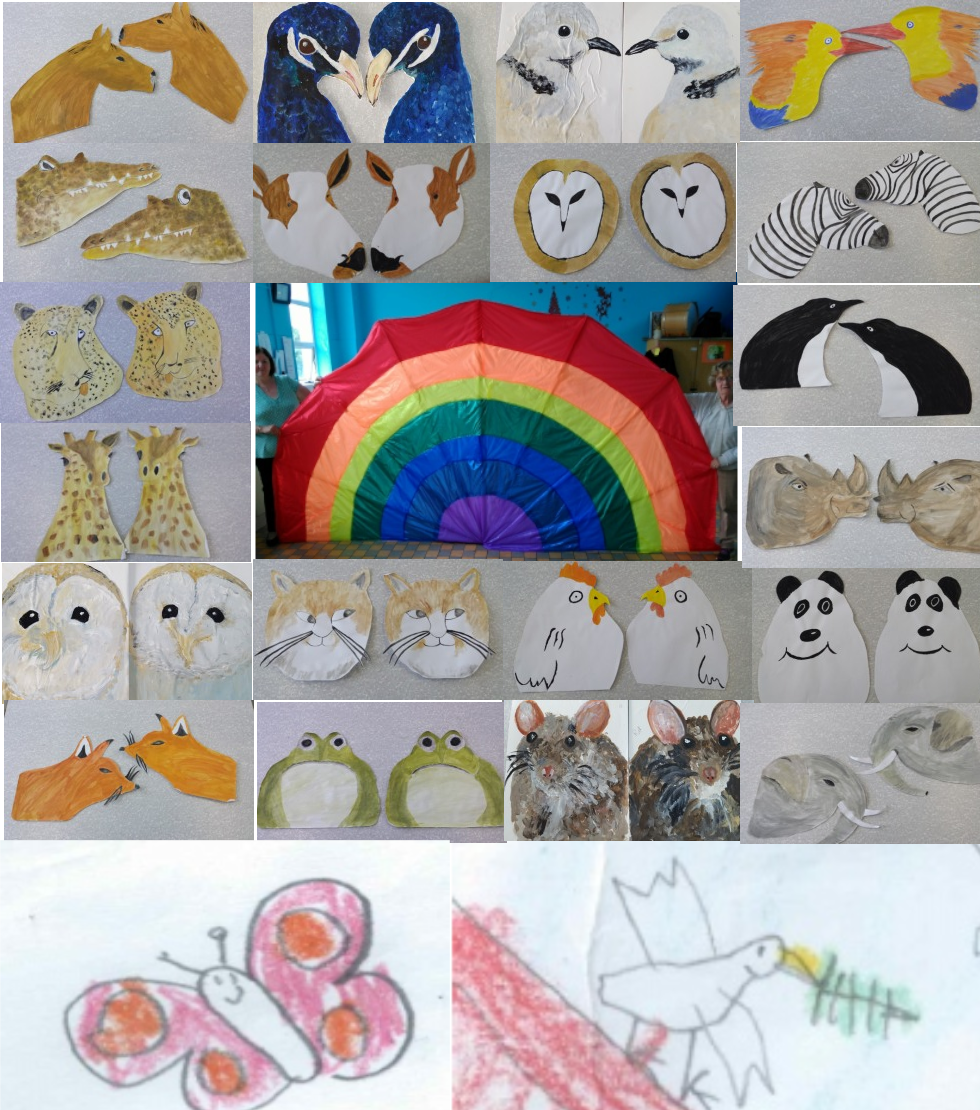