President Higgins Visits the School, December
In December the newly elected president of Ireland visited the school. Earlier in the year orchestra members met president Mary McAlleese, and there were visits from The RTÉ Concert Orchestra, DEIS school principal and the RTÉ Vanbrugh Quartet. The Musical Society put on it’s first production and there was no shortage of performances throughout the year. 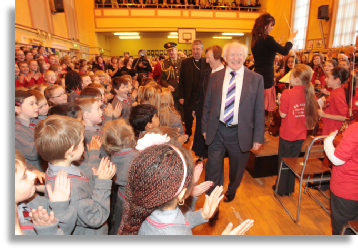 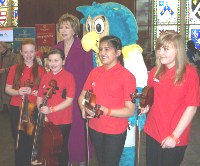 St Agnes Parents String Orchestra with Sounds Ensemble raised €1088 for Haiti at their concert on 26th February in the School Hall at St Agnes. Their programme "Beatles to Beethoven" concluded with "Thank You for the Music".

Inter-Schools Music Festival Saturday March 5th  - St Agnes/Scoil Colm Primary School Orchestra were runners up in the MILLER CUP (Primary School Orchestra competition) at the Inter-Schools Music Festival hosted by Wesley College on Saturday March 5th. Conducted by Seamus Doyle, they played "The March of the Meistersingers" in an arrangement by Sandra Dackow.

All three of St Agnes' 1st classes  go to Cor Fheile in the National Basketball Arena on Wednesday 9th March where they demonstrate their skills and talents in an inter school non competitive event.

More than 80 visitors came to St Agnes for the demonstration of the music programme in the school. Fifty of the visitors were school principals, coming from Waterford, Cork, Limerick, Ennis, Sligo, Drogheda. They watched a presentation of work by Ms Eithne Brennan's Junior Infant Class, Ms Doherty's 1st Class, Ms Thimb's 2nd Class boys from Scoil Colm and a sixth class quartet from St Agnes. They then went upstairs to the "cookery room" to hear St Agnes/Scoil Colm Primary School Orchestra and St Agnes' Parents String Orchestra upstairs. Thanks to all the parents who came in on a Friday morning especially for the presentation!

Three string quartets from St Agnes performed at the concert in the Ballroom of Hotel Conrad on April 7th 2011. They enjoyed the exciting lighting and the performances by students from the CRC school.

At a meeting in the City Wall Space, Dublin Civic Offices, Seamus Doyle was elected to represent Dublin South Central on the Steering Committee of the CDVEC Dublin City Music Education Partnership.

MayTuesday May 3rd - Coffee morning for parents of "new" DYO players
An informal coffee morning took place in the cookery room where parents of players who have just got into th Dublin Youth Orchestras at the recent auditions could meet and chat with parents whose children had been members for a year or more and pass on a few tips - the big message was - "Don't miss rehearsals!"

Tuesday May 3rd  - First meeting of the musical society - planning to do Oklahoma!

The performances of Oklahoma are planned for March 24th and 25th 2012. A group of more than 30 are involved. Auditions for the six big solo parts are scheduled for September 12th. Read more

This was a memorable day when RTE Vanbrugh String Quartet came for a workshop and concert, playing works by Haydn, Mozart, Bartok, Borodin, Shostakovitch and Moeran.

More than 100 musicians took part in the 2011 Side by Side concert including guest players from the RTE National Symphony Orchestra, RTE Concert Orchestra and several Dublin amateur orchestras. Read more

Members of the "Oklahoma!" chorus sang at the Crumlin Mental Health Association concert on Saturday 8th October in St Agnes Parish Centre, Crumlin Village. Their programme was accompanied by Pauline Cooper, piano, and conducted by Joanna Crooks, deputising for Eimear O'Grady. A string quartet from the Parents Orchestra led by John Whelan also performed at the concert.

The first annual Christmas Market took place on Saturday December 3rd and raised over €3000 for the School Violin & Orchestra project. Santa Claus arrived by fire engine and the Christmas Market was opened by Miriam O'Callaghan, who stayed to enjoy a cup of coffee in the Christmas Corner Cafe. Read more

Fifteen children were chosen to sing at the Ceremony for the turning on of Christmas Lights at Aras an Uachtarain, escorted by Sister Bernadette Sweeney and Adrienne Ni Cheallaigh. A photograph appeared in Saturday's Irish Times Read more

The School  was excited and delighted to receive a phone call from the office of newly elected President Michael D Higgins, to announce that the President would like to visit the music project at St Agnes. A guard of honour from Scoil Colm, Rosary College and Crumlin Youthreach as well as from the Early Start and Infant Classes greeted the President on his arrival at St Agnes. All other children in the school were waiting for the President in the hall, along with St Agnes/Scoil Colm Primary School Orchestra, St Agnes' Parents String Orchestra and members of Sounds Ensemble.There was considerable media coverage. Read more. The President was greeted on arrival by School Principal, Sister Bernadette Sweeney, the Archbishop of Dublin and the Chairman of the Board of Management, John Mooney.  Photogallery

On Wednesday December 14th a group of players from St Agnes' Scoil Colm Primary School Orchestra played at the Sandyford offices of Microsoft Ireland, for the staff Christmas lunch. In addition they were given tours in small groups. On departure Microsoft gave an XBox 360 with Kinect as a gift to the school.

The Christmas Concert took place on Thursday 15th December at 6 pm under the baton of Seamus Doyle and was a very happy occasion.

Bank of Ireland Walkinstown  - On Wednesday December 21st a group of players from St Agnes' Parents Orchestra played Christmas music in the Bank of Ireland, Walkinstown, who were collecting on behalf of the Make-a-Wish-Foundation.