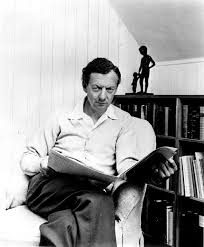 Benjamin Britten was born in 1913, and lived until 1976. His mother was a very keen amateur singer, and young Benjamin loved music, and began composing at the age of 5, going on to study later at the Royal College of Music, London.

He wrote many works for voice, including songs, choral works, and large scale works for orchestra and voices like the ‘War Requiem’. His best known opera ‘Peter Grimes’ is about a fisherman in a small English fishing town. This work placed him as the greatest Opera composer from the UK for centuries.

Among his best known orchestral works is the ‘Young Persons’ Guide to the Orchestra’ – a piece shows off in dazzling fashion each instrument of the orchestra (with or without narration), while being a thrill for any listener at the same time.

Britten wrote ‘Noye’s Fludde’ in 1958 as a work that would include people from throughout the community, and as well as small number of professional level singers and instrumentalists, he gives key roles to younger artists also. The animals are all played by children, and Britten envisaged young artists also performing many of the instrumental and vocal roles.